How to Pick the Best Garden Tools? 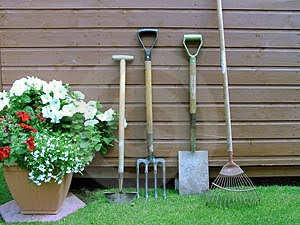 Ask any gardener worth their salt if they have their own particular favourites when it comes to garden tools, and the answer will almost always be a resounding yes.

For some, the tool in question might be a very well-used shovel or spade, its metal tip rounded and razor-sharp from long years of regular use. For others, it's a favourite hoe, a special hand-trowel, a much-loved rake or a weeding implement that they've owned forever and would now hate to be without.

These are the special tools with which the gardener has formed an affectionate bond, the dependable ones that go straight into the wheelbarrow at the beginning of a hard day's gardening, to be used again and again. And then there are the rest of them...

The "rest of them" are the tools found hidden at the back of most garden sheds, festooned with cobwebs, coated in a layer of rust, their handles cracked and their blades broken. They're the tools that never really did what they were supposed to do: the secateurs so blunt that it would barely cut so much as a blade of grass, the garden fork so flimsy that it crumpled on contact with the first large stone, the spade so short-handled that only a child could use it without getting an aching back.

Bought long ago, on impulse or in a sale, they are now heartily despised. Bitter experience and hard effort has taught their owners that there's nothing like bad gardening tools to turn the already-arduous tasks of weeding, digging, hoeing, raking and pruning into a series of hair-pullingly tedious, tantrum-inducing chores (having a hissy fit about a broken spade/fork/shovel/hoe while ankle-deep in mud is, as some will know, a peculiarly dispiriting, undignified, experience).
Now do you know how to pick the best garden tools thus to grow you garden perfectly?