Step 1: Design a Green Space in your Workplace 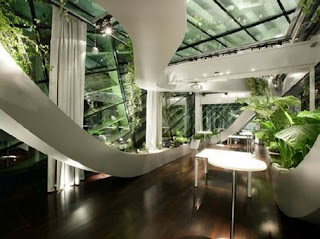 At the design company Wolff Olins, in the concrete jungle of London's Kings Cross, workers often arrive at the office early, particularly in the summer, to work on the sizeable vegetable garden on the roof.

Wolff Olins's building manager, Stuart Robertson, says the garden makes being at work more enjoyable. "Rather than just going from a house to an office, it gives you some interaction with nature during your day," he says.

The garden is maintained on a day-to-day basis by a staff club, but everyone in the company is encouraged to join in when they can. As well as providing employees with an opportunity to get their hands dirty, get outside and mix with colleagues from other departments, the garden also provides plenty of fresh, organic produce for the staff restaurant.

From a PR point of view, the garden is a visible symbol of the company's commitment to both environmental issues and employee welfare.

For The Office Group in London, which rents out office space, having a garden has brought financial rewards. "The roof garden definitely helps us rent the offices out," says Charlie Green, co-owner of the company. "People love it.
They have meetings up there, it has Wi-Fi, they can help themselves to freshly grown vegetables. It's one of the first things we show prospective tenants." The company's garden is maintained by a charity called Global Generation, which involves young people in environmental projects in the community.

Of course, not every firm will be able to rustle up a gardening club or find a local charity willing to take on the demands of looking after a full-scale vegetable patch, or have a sizeable roof terrace to hand. But even a small courtyard with some plants and benches can create a place for staff to escape and breathe in fresh air – as long as it isn't colonised by the smokers.


(not finished to be continue)

= Planting a Garden in Your Offce with 3 Steps I: Design a Green Space in your Workplace

= Planting a Garden in Your Offce with 3 Steps II: Advantages of Owning a Workplace Garden

= Planting a Garden in Your Offce with 3 Steps III: Start Now!

* Original Resource: Planting a Garden in your Offce with 3 Steps - Advantages of Owning a Workplace Garden
Posted by Garden Tools World at 2:05 AM 4 comments: