How to Grow Blueberries?

When the topic comes to blueberries, my saliva begin to flow out beyond my consciousness, because I love blueberries when I still was a child. As United States is the world's largest country of blueberry production and consumption, who also has it own methods on blueberry cultivation. Today, let's learn more about blueberries from how to grow blueberry and its varieties. 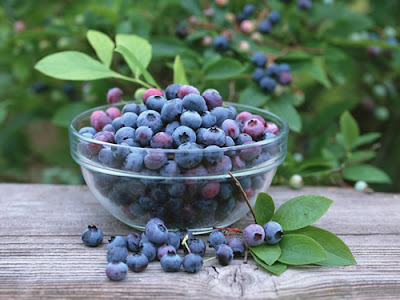 Blueberries are generally grown in northern climates with cool winters and mild summers. But some newer varieties do well in very cool or very warm climates.

Rabbiteye plants like warmer temperatures. Some of these bushes grow three meters tall.

Blueberry plants do best in soil that is acidic.

Plant expert Steve Renquist at Oregon State University says blueberry plants can grow well in containers. He says dwarf varieties are a good choice. These plants are often less than half a meter tall.

Steve: "Blueberry plants have a pretty shallow root system. It is not particularly vigorous. And so that is why they do well in pots, because of the light soil mixture. But they also require, then, fairly frequent watering because they are going to dry out a little faster. With any plant, a pot dries out faster, the pot does, than any plant that is in the soil."

Blueberry plants do not need a lot of pruning. Instead, just a little thinning is needed, or as Steve Renquist puts it, "a stem here and a stem there."

Steve: "We've had a number of them growing in our master gardener locations both in the ground and in pots. And we notice that we need to reinvigorate and repot them about every four or five years.”

Blueberries are sold fresh, frozen and processed, and used in baked goods and other foods. Major production states include Maine, New Jersey, North Carolina and Florida on the East Coast; Michigan in the Midwest; and Oregon, Washington and California on the West Coast.

Maine produces wild blueberries, but most commercial growers in other states use cultivated highbush plants. The North American harvest runs from the middle of April through early October.

The United States and Canada are the world's largest producers and consumers of blueberries. But South America, Australia, New Zealand and Europe have also developed highbush blueberry industries. And demand is growing in other markets as well, especially Japan.

The US Highbush Blueberry Council points out that the blueberry is one of the few fruits native to North America.

* Original post: How to Grow Blueberries
Posted by Garden Tools World at 12:26 AM No comments: